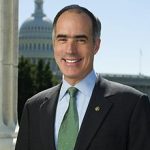 Top Stories
It’s another day-after-a-primary, and once again, Clinton and Trump were winners – though because Washington state already had a Democratic caucus (even though about four times as many voters showed up for the primary over the caucus) Clintons’ win doesn’t count for anything. Talk about a rigged system.

In New Mexico last night, Trump gave a speech – and protesters finally had enough. Apparently, New Mexicans don’t like the guy who wants to prevent any other new Mexicans – or any other immigrant – from becoming Americans.

Truthfully, just as John Melendez predicted, Trump’s old comments that reveal who he truly is are already beginning to cause problems for him. The latest fuel for the Trumpster fire is a 2006 interview he did for Trump University, where Trump said that he hoped a big real estate crash would happen so he could “make a lot of money.”

That comment earned him a verbal ass-whuppin’ from Rep. Tim Ryan of Ohio on the floor of the U.S House, and a blistering condemnation from Sen. Elizabeth Warren at a speech on Thursday. It also allowed former Sen Bill Bradley to expose Trump’s lies on taxes even further.

Trump also got called out by Jake Tapper for trying to use old, proven lies & smears from the 1990s.