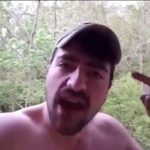 Charlie Pierce of Esquire.com Calls in for Hr 2

Top Stories
It’s Tuesday, Day 2 of the RNC in Cleveland, and the key thing to remember is to never plagiarize a major public address. Also – and this is a completely original thought – imitation is the sincerest form of flattery.

In case you missed it, after a day where the GOP establishment basically told the #NeverTrump Republicans to STFU, and Chachi called Hillary Clinton a c*nt, the Republicans were thrilled when Melania Trump delivered her version of Michelle Obama’s 2008 DNC speech. Not surprisingly, Mrs. Trump told Matt Lauer earlier in the day that she didn’t have much help writing her speech last night – which, when you think about it, is probably true. Typing “Control C” and “Control V” on your keyboard really doesn’t count for assistance.

Meanwhile, Hillary Clinton was speaking at the NAACP conference in Cincinnati, where she said the attacks on police, and the insanely high numbers of gun deaths of African-Americans must stop. She laid out her policy, and spoke like someone who understands the complex details of governing, instead of just screaming emotionally (lookin’ at you Giuliani).

But somehow, that seems perfectly fitting for the Republican National Convention.