Jody Hamilton of the ‘From The Bunker’ podcast & more LIVE in studio for Hour Three! 11am EST / 8am PST 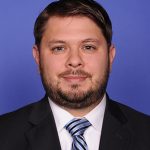 Rep. Ruben Gallego from Arizona’s 7th congressional district (who we had on last Wednesday in Philly) 11:30am EST / 8:30am PST

Top Stories
It’s been almost a week since Khzir & Gazala Khan, Gold Star parents of Captain Humayun Khan stood in front of America at the DNC and called out Donald Trump for his hypocrisy & disrespect of many American military members and their families — and Donald is still acting like a spoiled brat, calling the Kahns names while he attempts to defend his indefensible conduct.

And while Republicans like Sen. John McCain have joined in blasting Trump for his childish behavior, from McCain to Ryan to McConnell, Republicans still refuse to pull their endorsements of Trump.

Meanwhile, after the love-filled DNC in Philly, Hillary Clinton’s poll numbers in seemingly every poll keep putting her more strongly in the lead all the time. Her support is so strong she was campaigning in bright red Nebraska on Monday, next to billionaire Warren Buffett, who called out Trump for still not releasing his taxes.

Trump’s closet keeps exposing even more bad news, like the latest story from the New York Times about Trump’s five deferments from Vietnam. But instead of focusing on issues, Trump is spending his time attacking the media on – what else – Twitter.

Here’s a tip, Donny, from our staff member who is a veteran: Twitter wars don’t count as military service.