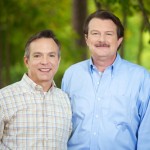 • Tim Bostic & Tony London, plaintiffs in the Virginia marriage equality case, call in at 9:30am ET / 6:30am PT to talk about the case

• President Obama announced Tuesday that the U.S. is once again moving to impose fresh sanctions on Russia as a consequence for its continued support of separatists in eastern Ukraine. The new sanctions target the defense, energy and financial sectors of the Russian economy.

• A broken water main near the UCLA campus sent a geyser of water some 30 feet into the air Tuesday, trapping people in underground parking garages and covering the school’s basketball arena with water.