• Jigar Shah, author of the new book “Creating Climate Wealth” calls in at 9:30am ET / 6:30am PT talks about the dangers of climate change

• Charlie Pierce of Esquire’s Politics Blog calls in at 10:30am ET / 7:30am PT to talk about what the gobshites are saying this week 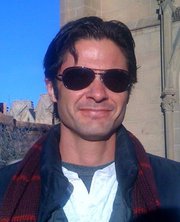 • Bob Cesca of The Daily Banter calls in at 11:30am ET / 8:30am PT to talk about the bizarre saga of GOP congressman Steve Stockman

• With the stroke of a pen, The Obama administration will take the next step in its multi-year effort to cut emissions and reduce oil use by getting better fuel economy from trucks. President Obama is set to announce the environmental initiative today in Maryland.

• Michael Dunn, the man who shot and killed a teenager in Florida after an argument over loud music, told his fiancée in a telephone call a month after his arrest that he was both the victim and the victor in the deadly encounter.

• A stunning catalog of torture and the widespread abuse of even the weakest of North Koreans reveal a portrait of a brutal state “that does not have any parallel in the contemporary world,” a United Nations panel reported Monday.

• To thunderous applause and with a Cheshire cat grin, Jimmy Fallon walked on to the stage at the NBC Studio in New York last night — the new host in the old home of the “Tonight Show.”