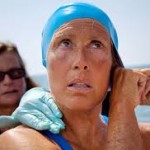 • Marathon swimmer and motivational speaker Diana Nyad calls in at 10:30am ET / 7:30am PT to talk about her stint on “Dancing With The Stars”

• Two objects spotted by satellites in the southern Indian Ocean may be debris from the missing Malaysia Airlines Flight 370, Australian authorities said Thursday, fueling hopes of a breakthrough in an international search of unprecedented scale.

• Ukraine’s acting president says the commander of the country’s navy has been freed after being held by Russian forces and local Crimean militia at the navy’s headquarters. Rear Adm. Sergei Haiduk and an unspecified number of civilians were held for hours after the navy’s base in Sevastopol was stormed Wednesday.

• Fresh criticism of a Senate bill to extend a lapsed unemployment insurance program has all but killed the chances that it will become law just a week after a compromise deal on the issue raised its prospects for the first time in months. House Speaker John Boehner, R-Ohio, has said the bill has no chance in his chamber.