• Dr. Wanda Von Kleist, a Licensed Clinical Psychologist who has a history of working with violent offenders with mental health issues, calls in at 9:30am ET / 6:30am PT to talk about the tragedy in Connecticut

• Actress Robin Weigert (Sons of Anarchy, The Sessions) joins us in studio at 11:30am ET / 8:30am PT to talk about her political new play, “Other Desert Cities” 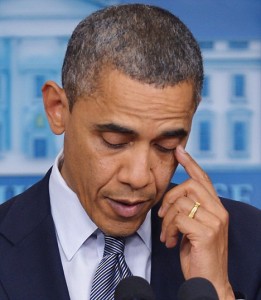 • President Obama assured the grieving, shell-shocked Newtown community on Sunday that “you are not alone” and vowed sternly to wield “whatever power this office holds” in a quest to prevent future mass shootings.

• Sen. Dianne Feinstein (D-CA) said she will introduce legislation next year to ban new assault weapons, as well as big clips, drums and strips of more than 10 bullets. “It can be done,” Feinstein told “Meet the Press” of reinstating the ban despite deep opposition by the NRA and similar groups.

• The gunman in the Connecticut shooting rampage was carrying hundreds of rounds of especially deadly ammunition — enough to kill just about every student in the school if given enough time, authorities said, raising the possibility that the bloodbath could have been even worse.