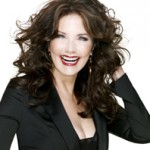 • Actress and singer Lynda Carter calls in at 11am ET / 8am PT to tell us about her upcoming cabaret dates in San Francisco, Los Angeles, and New York

• The man who gunned down three fellow soldiers at Fort Hood in Texas and wounded several others before killing himself suffered from mental illness and may have argued with other soldiers before the rampage, the base’s commander said Thursday.

• Mozilla co-founder Brendan Eich is stepping down as CEO following protests over his support of a gay marriage ban in California. The Mountain View, California-based nonprofit maker of the Firefox browser infuriated many employees and users last week by promoting Eich.

• A bill to extend unemployment insurance benefits cleared a final test vote in the Senate by the thinnest of margins Thursday and his headed for a vote on final passage Monday. It is not expected to pass the House.

• David Letterman announced Thursday that he’s retiring from CBS’ “Late Show” sometime next year. He made that announcement during the taping of his program Thursday afternoon at New York’s Ed Sullivan Theater.