• Charlie Pierce of Esquire’s Politics Blog calls in at 10:30am ET / 7:30am PT to talk about Memorial Day and about Romney and his economics 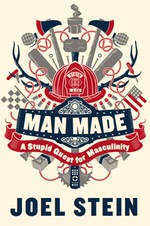 • Joel Stein, columnist for Time Magazine, calls in at 10:45am ET / 7:45am PT to talk about his new book, “Man Made: A Stupid Quest For Masculinity”

• President Obama on Monday paid tribute to missing and fallen U.S. forces, laying a wreath at the Tomb of the Unknown Soldier and marking the 50th anniversary of the Vietnam war at the Vietnam Veterans Memorial.

• At the Veterans Museum and Memorial Center in San Diego on Memorial Day yesterday, Mitt Romney took a political tone. He expressed concern over the world’s security while singling out countries like Iran and China that he contends pose a threat.

• Mitt Romney is likely to formally seal the Republican presidential nomination today with a big victory in Texas that may give him a burst of momentum in his November 6 showdown with President Barack Obama.