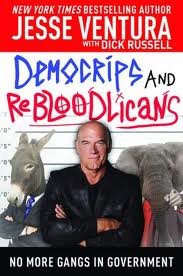 • Gov. Jesse Ventura calls in at 11:30am ET / 8:30am PT to talk about his new book, “DemoCRIPS and ReBLOODlicans: No More Gangs In Government”

• The Department of Justice is making good on its stated plan to sue Florida over Republican Gov. Rick Scott’s controversial sweep of the state’s voting rolls, filing a complaint Tuesday alleging that the efforts are in violation of the National Voter Registration Act of 1993.

• Sen. John Cornyn (R-TX) called on Attorney General Eric Holder to step down at a hearing of the Senate Judiciary Committee yesterday. Holder was there to answer questions about the Obama administration’s response to a report in the New York Times about U.S. efforts to curtail Iran’s nuclear program.

• Former Penn State assistant coach Mike McQueary told jurors in Jerry Sandusky’s sex abuse trial Tuesday that he saw his ex-colleague with a prepubescent boy in an on-campus shower and that he that he heard “skin-on-skin smacking sound.”